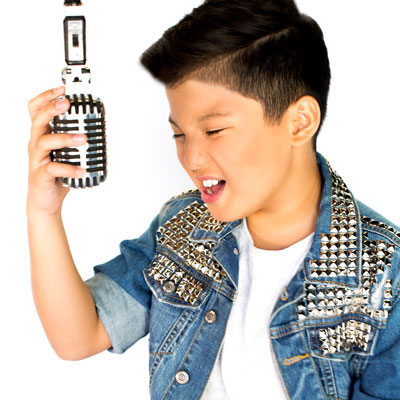 Though only ten, Ty Waters  is poised for greatness in American popular music. This child prodigy singer from Vancouver, Canada, has already wowed artists from Michael Bublé to Bobby McFerrin, performed at the infamous Carnegie Hall four times after winning American Protege’s Vocal Competitions including He recently brought a crowd of a 100,000 to rapture in Santa Barbara with his devastating rendition of “At Last,” made famous by the great Etta James. And even more recently performed at Los Angeles Wilshire Ebell Theater to two minute standing ovation.

Waters has performed in Harlem’s famed Apollo Theatre and has been invited to sing there again later this August. What’s more, as he moves into the world of composition and recording, Waters is making surprisingly mature and timely statements about the state of the country and the world. Waters has just completed his debut album, Only Human. The title track and video rolled out on KKFX (Fox 11) on morning show on July 23, giving the central coast the first taste of what this remarkable young man has to offer the world.

Ty Waters is no stranger to adversity. Born in Vancouver to Filipino parents, he reached the age of two with delayed speech. There would be a two-year wait before he could take advantage of public health system’s speech therapy treatment. His parents investigated alternatives, including music therapy. So they improvised, teaching Ty various nursery rhymes. To their surprise, Ty started to jazz up these nursery rhymes on his own. His parents recognized his interest in singing and started showing him clip after clip of classic pop performances by the likes of Michael Jackson, Stevie Wonder, Prince, Lionel Richie, and Etta James.

The effect was instantaneous. Young Ty began mimicking rhythms, melodies and words perfectly, shattering what had seemed an insurmountable challenge in speech. By age six, not only had Ty vastly improved in his language development, but he had begun to blossom as a singer of remarkable power and precision. Waters then began studying at the Sarah McLachlan School of Music in Vancouver, and before long, he was performing concerts and drawing attention as a singularly gifted young artist.

Ty Waters  is on radio rotation with the track “Only Human”.

Cole Allen is a 16 year old indie pop artist form a small town in Canada. It’s has been his dream to spread his…