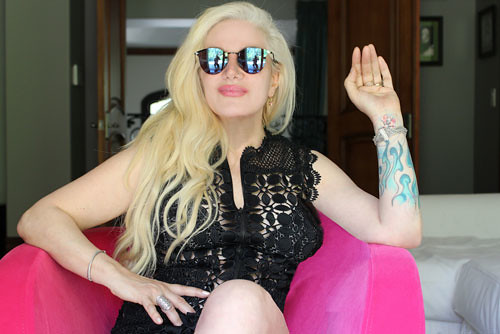 Betty Moon is a Toronto-born singer, songwriter, producer, and filmmaker. Known for her sultry voice, rock n’ roll attitude and visionary appeal, Moon is an always-evolving tour de force. Moon’s music has been featured in a variety of television shows and films including Californication, Dexter, Bounty Hunters, Walking the Dead directed by Melanie Ansley, and Last Gasp starring Robert Patrick.

Moon’s first album deal was with A&M Records, and her self-titled debut LP was released while living and touring throughout Canada. She has been nominated for four CASBY Awards including Best Album of the Year, Best Single of the Year, Best Video of the Year, and Best Artist of the Year. Moon released multiple records after her debut album, which includes Doll Machine (EMI), STIR (St. Clair), Demon Flowers and multiple releases via her label Evolver Music including Rollin’ Revolution, Amourphous and Pantomania.

Moon’s 8th studio album CHROME was released on August 25, 2017. Betty Moon is on radio rotation with the tracks, “Life Is But A Dream” and “Sound”.