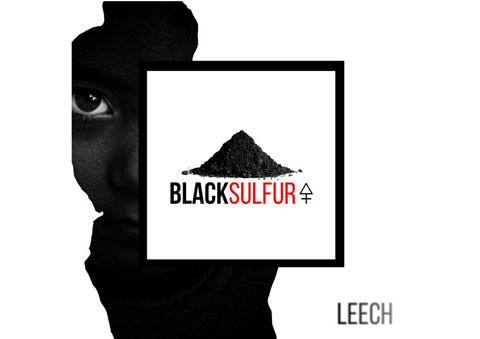 Black Sulfur is a hard rock band from South Africa (Richard La Grange – Vocals, Jonathan Kelly – Guitars) and England (James Chapman – Drums).The band is now releasing its 11-track album, entitled “Leech”. This is what I would typically an album for the fans. It doesn’t let up until the very last song, and only then are you allowed to catch your breath.  The entire “Leech” album is so full of chunky, groovy, guitar riffs that it’s disgusting. Every song offers up a riff that elicits even the most stubborn people to bob their head in tune. The drums hit hard, the bass lines are heavy, and La Grange’s voice sounds great.

From the opening track, “Blind Pig”, you know that this album is going to be blistering. As for the rest of the album, pick a song and it’ll be a standout. The title track “Leech” and “Never Take Me Alive” has to be among my absolute favorites though. They are incredibly heavy and see the band, as a whole, playing some of their most focused, driving, and forceful beats on this collection.

“Judgement Day” and “My Last Trip” are two very riff-oriented songs that absolutely crush when played on a good system. If you really need to catch your breath then stop over at the power ballads “Never Be Alone” and “We Are One”. In between, you’ll discover the groove of “Rock Is Dead” and “Divide Us”. Black Sulfur is a rare breed.

Black Sulfur is on radio rotation with the tracks  “Leech” and “Divide Us”.