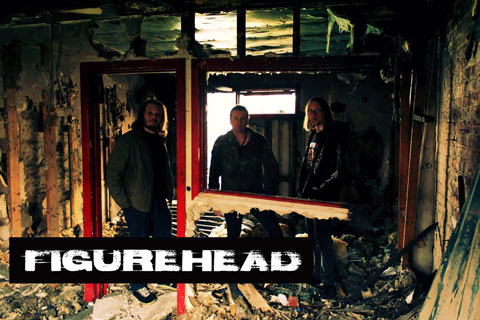 Born in Banbridge, Northern Ireland – Figurehead was formed as a way to counteract the waves of overproduced mediocrity that is found filling the airwaves. Three misfits thrown together are attempting to make some serious music. Fuzz on drums and lead vocals, Patson guitar and Dylan on bass.

All three fit together perfectly. In addition to the sonic monstrosity of the instruments, Fuzz’s vocals sound like he is exorcising his deepest, darkest demons. The animalistic sound effects blended into the track only adds to this assumption!

Figurehead produce a raw, ferocious, eardrum-shattering mountain of sound, which grabs you by the temporal lobes and doesn’t let go. The song blurs together in a way that only makes the music that much more powerful. The lyrics are inscrutably disturbing and quaint which will no doubt convince me to analyze the band in much more depth at a later date. Basically, if you enjoy heavy, old-school, ass-kicking, adrenaline-and-testosterone-fueled rock, Figurehead is for you!