IKMBT is 25-years old, a reggae, hip-hop artist, and songwriter from America. Ikponmwosa Ediagbonya was born in Nigeria, but he later shifted to the US when he was nine. Right from his childhood, he had a passion for drums and music. After fully adapting to American culture, he pursued his childhood passion and took his first step in hip-hop music. Growing up, listening to Fela Kuti and Bob Marley’s likes, IKMBT developed a keen interest in afro-beats and reggae style music, which have now become his music genres.

He kicked off his career by producing beats from his iPhone. And to polish his skills even further, he got enrolled in an audio engineering course; however, things didn’t go as planned. Ikponmwosa started his journey five years ago with the thought of spreading the word of God through his music. He wanted to enrich people’s hearts and uplift their spirits through God’s words.

He began putting his words to the beats and produced his first song, along with his friend Ade, in 2018. He launched his initial albums on SoundCloud but later shifted to Spotify and iTunes. IKMBT plans to set up his studio and inspire millions of people through his music in the future.

IKMBT is on radio rotation with the track “As of Lately”.
OFFICIAL LINKS: SPOTIFY – APPLE MUSIC 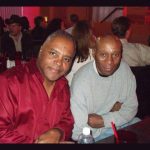