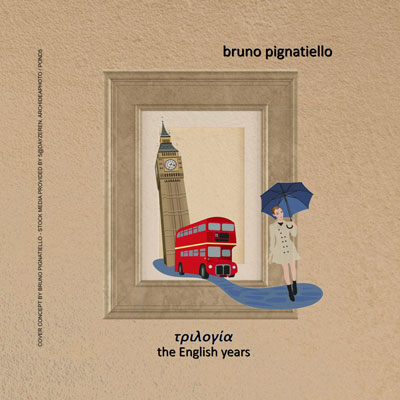 Bruno Pignatiello was born in Rome, in 1966 and only in recent years he matured the awareness to be born in a city of extraordinary beauty and ordinary chaos. Omnivorous of music, he likes to listen to all the sounds and languages of the world but he prefers, above all, those coming from Brazil and the Lusitan area. Bachelor of Arts, linguistic field, he likes to write the lyrics of his songs in Portuguese (become a kind of adoptive language now!). He doesn’t leave out his Italic roots and also the English language which is his first cultural passion.

In the past, before making some trips abroad (Brazil, Portugal, Canada, Greece, Great Britain), he devoted himself to the divulgation of the music performed by some Brazilian artists belonging to the “geração roqueira”: Barão Vermelho, Cazuza, Paralamas do Sucesso and others…

An Intercultural mediator, he deeply believes in dialogue and in the multicultural society, convinced that “each person we didn’t listen to is an opportunity we missed”* as human beings. He lives some miles out of the roman jungle and he is in love with life for what it made him become and for what it will make him become.

“τριλογία – The English years” is the fourth album by Italian songwriter Bruno Pignatiello, published December 25, 2015. It contains four original songs and 2 covers, sung in English. Some songs have a duet with American singer-songwriter and musician Marisa Frantz. This work is the first part of a trilogy of EPs, sung each in a single language. You can buy this album or the single tracks from the usual shopping sites.

Bruno Pignatiello is on radio rotation with the tracks – “The Angel Flight” and “The ElegANT Man” (The Ballad Of Joseph Merrick).