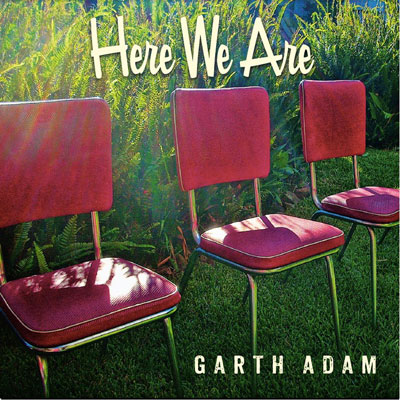 Garth Adam’s new 3 track EP “Here We Are” has been just been released as a CD and on digital platforms. This is the ninth solo release since this Australian native’s first album, Great Ocean Road in November 2002.

Garth’s music is a mixture of his influences and life. Born in the UK, he spent his early childhood in Africa and Fiji before his family settled in Australia, where he eventually worked his way as a songwriting bass player through a variety of Australian bands.

The EP begins with “This Time” which has some of that great rhythm feel of an Oasis acoustic track. The second track, “Here We Are,” is similar to British bands such as Coldplay if they used more guitars. The third track, “Wherever You Go,” is a straightforward pop rock suitable for an AM car radio in summer.

The songs were recorded in a studio where 90% of the equipment was made pre 1975. Producer Melvin Tree loves this studio because it can give you the sound of those landmark seventies albums like Born to Run and Goodbye Yellow Brick Road. It’s all tube amps and overhead mikes in a great sounding room.

Travelling was recorded at Linear Recording in Sydney and produced by Melvin Tree. Mastering was by Kathy Naunton at Db Mastering Camperdown Sydney.

Garth Adam is on radio rotation with the track “This Time”.