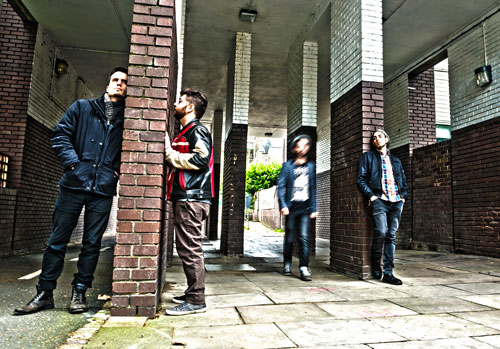 Humans came to be through chance encounters…A Sicilian drummer casually meets an Australian busker in a Restaurant in Melbourne…They cross continents and land in East London where they acquire an English guitarist and a Milanese bassist… They release a humble live recording called “All the fish”, to critical acclaim, and then promptly disband again for visa issues.

Auspiciously, they came back with a plan: to pick right up where the marvelous XX left off…and found they weren’t quite chilled enough… so they decided to take on the mighty Radiohead…and, just not quite eclectic enough…Coldplay? Alt J?, no way…Muse? The Doors? Hiatus Kaiyote?!?

So, after much soul searching, they decide to attempt the impossible: try and sound like themselves…Low and behold, that is how by far the best Human in Bloom sound-alike band ever came to be. Psych-alt-rock-indie-electronic-experimental-folk-pop at it’s very best.

And finally, thanks to another strange encounter, the band is currently in the studio with Muse’s long term collaborator, (additional producer / recording & mix engineer) and recent Grammy Award Winner for Drones Tommaso Colliva.

“Humans draw influences from robots, the noise of machines and the intensity of traffic flooded city streets. They are emphatic about the accelerating, cyclical nature of humanity and how the brain has streamlined from spirituality through to technology, but troubled that most all the music that comes with it is just a synthetic excuse to feel better about ourselves while we’re glued to our iPhones and Facebooks.

They unfashionably deal with institutionalized lies, artificial indoctrination, wasted lives, (contra)addictions and stolen dreams… They sing of billboards, fear porn and our enduring struggle with loss of innocence, freedom, creativity and individualism… They speak of the confused and the alienated, of the innate desire to conform and hide and of our desolate disappearance (descent?) into the welcoming arms of the Machine Mind…Providentially, they do so in a gloriously sympathetic and positive way…one of them would really like to change the world and is a convinced vegan, another is merely mostly intolerant and the rest… well, they just merrily love to groove.

Human in Bloom is on radio rotation with the tracks, “Late Ol’Night” and “The Armoury”