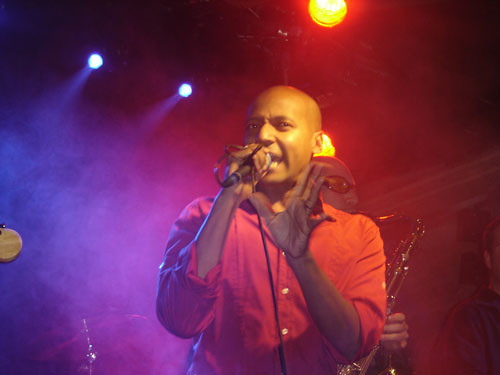 Swedish/Eritrean musician Kahsay was born in Asmara, Eritrea and moved to Sweden as a child. Kahsay’s music career started when he and his childhood friend J.K Roberts (Impera) started their first band, The Invaders. The band where inspired by KISS, Queen and Iron Maiden. Later on Kahsay broadened his inspirational heroes to include artist like Prince, Bootsy Collins, James Brown, Earth, Wind & Fire and Rick James.

Kahsay started out as a bass player and then moved on to play rhythm guitar and sing lead vocals. Early on Kahsay knew that he wanted to sing in English and write his own music and lyrics. After The Invaders split, Kahsay joined a punk band in Stockholm called the Scabby Hyenas. This was also the first time that Kahsay entered a real studio. The band released a vinyl single with a song called “Jimmy The Frog”.

In 1987, a friend approached Kahsay stating he was about to start a funk band. An original act. Kahsay joined the band and together with BJ, Stu, Jake and Fred they started SAY What and began to write original songs and to perform on Stockholm club scenes. The band SAY What played for several years and had some minor success, recorded a vinyl single, performed on national TV, and in 1996 they recorded a 3 song CD.

About the same time the band started to disband due to parenting and other life events. Kahsay started to work in a studio called Backbeat Studio, and collaborated with DJ Ledberg. Kahsay put more time and energy to his song writing skills that landed him a record deal with Stockholm Records, as a solo act.

Kahsay’s first song was produced by Denniz Pop & Max Martin, and made it well on the Swedish charts. He proceed to record an album with producers from the EZ productions team (Rami – Britney Spears, Backstreet Boys). Kahsay and Rami wrote a couple of the songs on the album titled “Coz I’m Kahsay”. Three songs were released as singles from the album – but none made it on the chars. The record company and Kahsay decided to go separate ways and the album release was canceled, until 2017.

The album Coz I’m Kahsay include songs like “Turn Me On” that made it to top 20 on the Swedish dance charts and the song also became Radio NRJ’s the hot song of the week. Jessicka Folcker sings on the song. Other songs are “Shake Your Head”, “Maybe It’s You” and the title song “Coz I’m Kahsay”.

Finally is the album “Coz I’m Kahsay” released, now under Kahsay’s own label. The album consists of ten songs and a remix of Turn Me On. All songs where written by Kahsay alone or in collaboration with other songwriters, such as Rami Yacoub, JK Roberts and D. Papalexis.

The album is dance oriented and consists of pop, funk, rock, ambient and classical acoustic ballads with a touch of gospel hymns.

Link to the album on Spotify: https://open.spotify.com/artist/0ulLnqWuCRwokNrtekGwm1