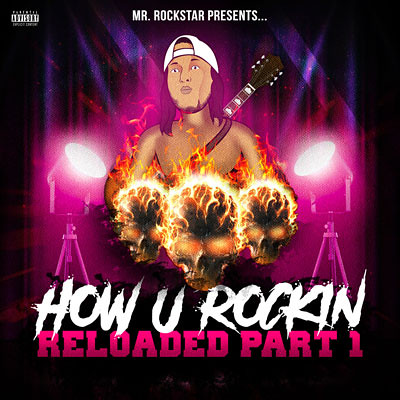 Marvin Chappell aka Trey aka Mr. Rockstar, has been doing music for his whole life. The Charleston, SC artist began rapping when he was 14 and never looked back. On May 8th, 2001 he was shot in the upper hip while walking to the corner store from a drive-by. He witnessed his first criminal conviction in 2002 when getting into a fight with a student at school and involved him carrying weapon. He was arrested and spent 6 months at Midlands inside Columbia, SC. He fought hard and got his degree and even a college enrollment at USC.

But he was still in the streets and had problems with employment along with coping with the world. He caught 3 charges in 2003. Drugs, stolen goods, etc. So he ended up in a bind and had to leave school even with a 3.916 GPA. Regardless of events he still wrote music, and even cut some singles with Charleston, SC producers BB Slimm and TwinD1st Century. He flew under radar for about 5 years writing songs trying to find steady work basically floating above water so he could breathe. But nothing worked so he started sneaker business which lasted a couple of years until he tried to let his brother take over. Unfortunately he didn’t stick to the plan.

In 2009 Mr. Rockstar became homeless and was in an out of jail. Though times where ruff he continued to write music and basically kept journals of his work. He stayed in the streets and one night while sleeping at his brother’s house he was pistol whipped half to deaf. Mental problems struck while he already had drug problems to cope with. Then I finally got work accomplish with Rip from Island Gorillaz and they recorded How U Rockin Vol. 1. Mr. Rockstar then took the initiative to put out work with his new producer Chief on da beat and completed How U Rockin Volume 2 and 3.

However he fell into another rut and got into a serious wreck where he woke up in there hospital. He now has seizures because of a multiple head trauma and has constant pain. He started a Life by Faith Campaign in 2016 to sell and collect donations to help Crime Victims, disabled people, and the homeless mainly because he had to deal with these problems in my lifetime.

He has put out 2 mixtapes/EP’s with he Tunna Beat Project and Block Work, and also has plenty of work coming out of his website www.mrrockstar100.com. Mr. Rockstar has also been on Coast to Coast Mixtapes with artist MGK and Young Dolph. A father of two kids – Tyreek Marvin Since Chappell and Tanaysha Alayaih Chappell – he is also a music producer, singer, songwriter, web developer, and graphic artist.

Mr. Rockstar is on radio rotation with the tracks “Bae” and “My Chevrolet (Street Mix)”.