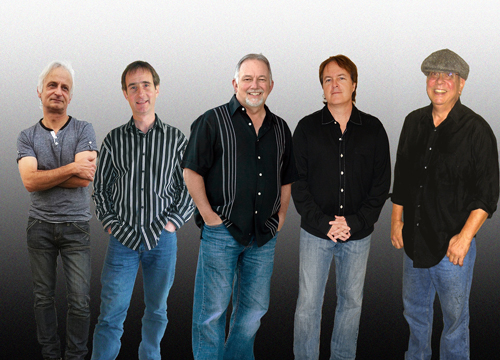 Steffen Goeres, saxophonist Stephan Goessl and drummer Raimund Breitfeld have played together since their teenage years. Although life and personal projects put them in different locations around the globe, they kept alive the desires of making music together over the years. Realizing that very long distances separate them physically but not musically, they recorded their first album “Global Experience” over 3 continents together with former members Don Bruner and Roland Childs.

The band’s global influenced pop-rock sound drew the interest of Texans Pat Hunt and Randy Miller, who produced the bands first album, and they joined the band December 2012. June 2013 brought the departure of saxophonist Stephan Goessl and the arrival of Texan guitarist Joe Gavito. And so, the current World5 lineup is once again complete.

Pat Hunt, Randy Miller, and Joe Gavito have played and worked together as musicians, songwriters and producers for 30 years in the music business. Pat has opened for acts such as Al Jarreau, The Pointer Sisters, Patti LaBelle, The Temptations, Willie Nelson, Merle Haggard, The Spinners, George Jones and many more. Pat has also produced CD’s for the American country icon Mickey Gilley of Urban Cowboy fame as well as reggae legend Johnny Nash. Pat was a finalist on the original Star Search.

He has co-written songs for Jennifer Holliday “I Never Thought I’d Fall In Love Again”, “After She’s Gone” for Mickey Gilley, and with Randy “Con Todo El Corazon” for the Grammy winning double platinum, international group La Mafia. Pat has played and arranged on five Grammy nominated CD’s and won a Grammy.

Randy made his name as a producer for the Latin´s Super Group La Mafia, producing 4 Grammy winning albums and getting 16 Grammy nominations along the way. His client list includes Marc Anthony, Kings X, Goldie Hawn, Burt Bacharach and Laura C. Singer-songwriter Johnny Nash hired Randy to remix the classic ‘I Can See Clearly Now’ and is continuing to work on several new albums with him.

Originally a drummer, guitar has been Joe Gavito’s weapon of choice for virtually all of his professional life. Joe has been associated with Randy and Pat for years on the stage and in the studio, playing on projects by Mickey Gilley, Johnny Nash, Randy Miller, Pat Hunt, and many more. Joe has also performed on stage with The Original Texas Playboys, Ezra Charles and The Works, Charlie Pride, Mason Dixon, Frank Martin Gilligan, Larry Gatlin, Johnny Nash, BJ Thomas, The Platters, Israel Houghton and songwriters Alex Harvey, Whitey Schaffer and Freddie Powers.

WORLD5’s first new song , “Man Of Action ” with Pat and Randy was released on the label MondoTunes and made it to the National Top 100 Airplay Chart shortly after it’s release.

The 2nd´ single “Maybe There´s A Way” was released in June followed by “Heartbeat Of The World” in October and Pat, Randy ,Steffen, Joe and Raimund are currently working on their brand new album, which they are looking forward to presenting to you.