The Proper Authorities is the solo project of singer/songwriter/multi-instrumentalist Keith Adams. Known primarily for his work with the bands The Hynx, Sound Mind and Giant Wow, where he shared bills with acts like Filter, Stabbing Westward, Meat Beat Manifesto, Alien Ant Farm, Moth, Jupiter One, Lab Partners, Dink, and many more. Adams created the Proper Authorities to branch out and work on his lifelong compositional and performance skills.

As in past groups, Adams continues to experiment strongly in the modern pop rock genre with sounds and grooves that aren’t usually found there. His appreciation for over-the-top arrangements is tempered nicely by his love for good hooks. His lyrics touch on a variety of subjects: matters of self; emotional snapshots in time; tragic and comic figures; and the things that we all want… or at least think that we want. 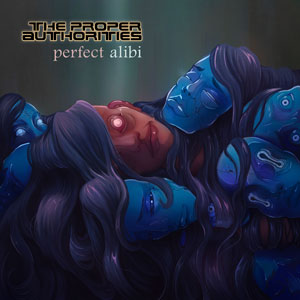 The most recent single, “Perfect Alibi,” uses dreamy synth, high-power guitars, and a pulse-pounding rhythm section to set the stage for an epic, sensual retrospective on a souring relationship, the increasingly visible cracks in its foundation, and the search for a sorrowful truth that seems already uncovered. The single “Regain Control,” released in 2019, is a high-speed, hard-hitting rock song about a successful heist, second thoughts, and tough consequences.

The Proper Authorities’ first full-length recording, “Public Service Announcement,” was also released through the imprint Talon First Records in January 2006. It features 13 tracks and over 50 minutes’ worth of high-impact material for listeners and lovers of heavy guitar, electro textures, lush vocal harmonies, and booty-shaking grooves.

“The theme I was most interested in was how time affects our approaches to living,” explained Adams about the 2006 album. “A song about ‘You can accomplish anything you want’ has more weight and realism to it when you add ‘But you’d better step up to the task before it’s too late.'”

Drawing on his professional skills as a multimedia developer, Adams has created videos for “Perfect Alibi” and two of the “Public Service Announcement” tracks, providing a visual element via self-produced hybrids of CGI animation and live action. The award-winning “Devastate” features a star-bound Adams facing an Earth-aimed cluster of asteroids, while “The Ninth Life Jitters” follows a man chased by shadowy pursuers.

Thomas von Holdt is a Country singer-songwriter from Germany. Thomas discovered his love of music at the early age of thirteen, playing in a…