Capt Crunch and the Bunch is formed by Andrea ‘Vipera’ Salani (former drummer with CCM, I Refuse It, Fase Quattro) and Frank Crunch (former vocalist with Phase Four and of La Cattiva Esperienza), as well as Emiliano “Er Biacco” Marianelli (ex-Toni Crimine and still The Bugz), the bassist Francesco Falorni (Reverberati and The Bugz) and finally the other guitarist Frankie Bo.

The combo assists its Captain in the love of an incendiary Beat that draws heavily on R & B. In particular, the band presents itself as the creator of a deadly mix of working class rock and R & B fun! From the Stones to Dr. Feelgood, via Capt. Beefheart, but without forgetting who had locally learned that lesson in the late 60s, like Mr. Anima aka Ghigo Agosti or the Rubi Strubi!

Capt Crunch and the Bunch have released a 12 track album entitled “Crimine Beat” which sees the recording split into two sides. Side one is performed in Italian, while side two is delivered in English. Both sides share one common denominator – ass kicking garage-tinted rock n’ roll, which lean heavily on adrenalin-pumping retro grooves and dirty, gut-busting guitar riffs.

Whatever label you attempt to put on this album it fails to describe just what is exactly going on in this modern sonic document that recalls the past. Whatever the case may be this is highly original and enjoyable music. If you consider yourself a rock n’ roll fan and you’re unaware of Capt Crunch and the Bunch — well, you need to become aware and need to hear what you’ve been missing.

Simply put, they sound like nobody else out there right now. If you love pure, primitive, unabashed rock n’ roll, then surely “Crimine Beat” will cause you involuntary grooving or ass-shaking. Moreover, if you have any friends who profess to loving rock n’ roll as well, then unleash this monster on them.

Capt Crunch and the Bunch are on radio rotation with the tracks – “End of Joy” and “Don’t Build Your Dreams Too High”. 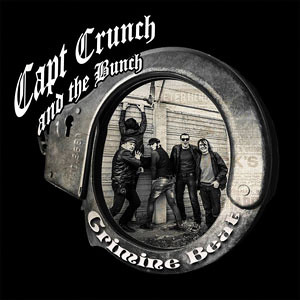