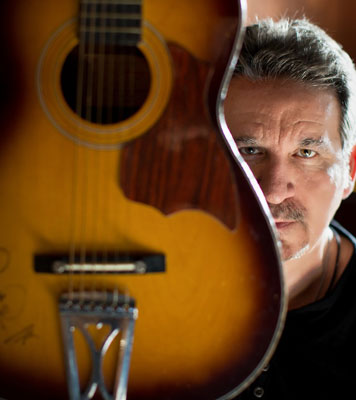 John Vento is often called a chameleon in the Pittsburgh music scene; and, while his critics may use the term as a pejorative, Vento views it as a compliment. He understands that they’re motivated by the frustration of their inability to lock him into a specific musical style. After all, the front man for the high-energy, hard-rockin’ bands, The Businessmen, and the Nied’s Hotel Band, is also known for his introspective, brooding solo recordings.

Rather than a drawback, however, Vento considers such diversity to be among his strengths; and his fans agree. They relish sharing his tumultuous trek toward achieving his artistic vision, which he accomplishes by channeling a blend of eclectic influences through his own, raw emotions.

Helping to engineer the roller coaster ride is a stout core of collaborators, including John Randall Fox, Buddy Hall, Tim Hadley, and Frank Ferraro, along with renowned playwright/lyricist, Amy Hartman. Many members of this crew have been with him for more than a decade; and it’s easy to understand why, as Vento consistently showers them with appreciation and accolades. Though a one-of-a-kind performer, he professes a great distaste for the word, “solo,” insisting that, “Without my collaborators, I would not have accomplished anything.”

That’s no surprise to those who know him, as he truly is a humble, loving, and grateful person, who treasures his family and friends. Certainly, that comes across, loud and clear, in his honest, from-the-heart songs; and that, undoubtedly, is another quality which endears him to his fans. As he puts it, “If just one person is touched in some small way by one of my songs, that’s the greatest reward that I could receive.”

Of course, it’s purely logical that Vento would find a great following in this town. His steely resistance to categorization is the very essence and backbone of Pittsburgh. Built by a veritable melting pot of blue-collar workers, the once-gritty city has risen from the slag heap, through the smoke and haze, to become a sparkling, spectacular hub of culture and learning. Yet, it remains true to its deeply-forged identity.

John’s 2019 MTS release is “Love, Lust and Other Wreckage.” His single, “Rainbows And Lightning” reached the Top 20 on iTunes Canada charts, receiving national and international airplay and charting.  John is a January 2019 Billboard Magazine Emerging Artist.

John Vento is on radio rotation with the track “Rainbows and Lightning”.