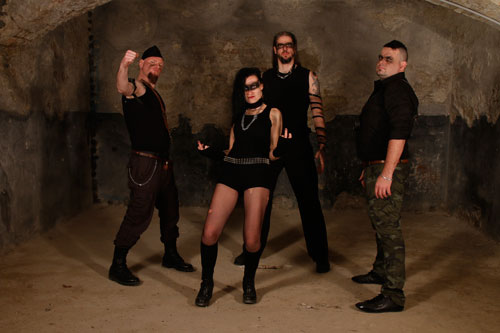 Under the sign of the ancient Egypt goddess Isis, Austrian independent metal legends Sunterra celebrate their reunion. After a 10 year absence they’re presenting a new and innovative output. Reborn marks the logical conclusion and resurrection of the band and they’re presenting a brand new opus, that is 100 % Sunterra plus a musical progression without forgetting their own roots. Sunterra combines Industrial Metal, Gothic and Electro with some kind of Dubstep and are creating their own, distinctive sound.

From the beginning: Back in 1998 Sunterra came to life after the split of the band Virgin Seed. The first band members were Chris Schön (bass), Friedl Schütz (guitar), Lilly (vocal), Elmar (keyboard) and Mick (drums). Together with Christian G (vocal), Sunterra released their first album “in diebus illis”, wherefore they founded their own label Tombstone Records. With this CD Sunterra called the attention of some promoters and played live on the Brutal Assault and as support band for Agathodaimon. After a short interlude Christian G. quit the band and was replaced by Carlos. With his entry the flute became an essential element of Sunterra’s sound.

In 2002 the band released their second album “lost time” together with W.O.B. Records. With this record, Sunterra arrested wide-ranging attention, especially with their song “out of the dark”, a cover-version in honor of the Austrian Popstar Falco. Features in big print-magazines as Sonic Seducer or Rock Hard helped the band to achieve concerts with the Gathering, Entwine, and Theatre of Tragedy, and a lot of gigs in Austria, Germany and the former eastern countries.

In collaboration with CCP Records the third album „graceful tunes“ was released in 2003, the highest-grossing CD of the band. Sunterra played a huge range of concerts across Europe, e.g. the Forestglade Open Air and concerts with Tanzwut, Subway to Sally or Crematory were held in front of an excited audience. In summer 2006 the band decided to take a break for an undetermined period. In December of the same year Sunterra played their last concert in front of a sold out venue in Vienna.

In 2015 Sunterra proclaimed on their Facebook-page that they were working on new material with a changed lineup. During this period the band members were Chris, Lilly, Carlos and guitarist and programmer Ivan. In the same year Sunterra signed a deal with the German independent label NRT Records and released their sold out albums again. In august 2016 the Sunterra finished the recording sessions for their EP “reborn”, showing a progression of the band’s music and sound. As a lyric guideline Sunterra works up the end and reincarnation of mankind. They’re presenting a new and more electronic sound perfectly implemented into the tradition of the band. The new CD “reborn” will be released through NRT Records early 2017.

Sunterra is on radio rotation with the tracks ‘Reign Supreme’ and ‘Shadow in the Dark’.

For Further Information about Sunterra and Reborn, check out these links. Remember: Reborn will be Out on January 2017: