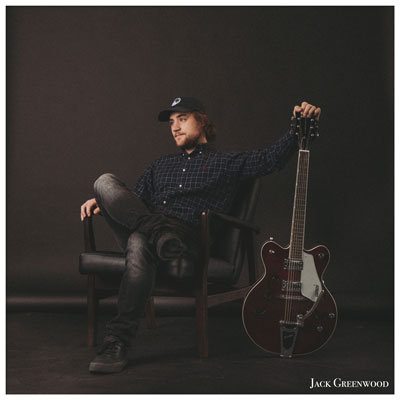 Born in the woods of Central Wisconsin, but transplanted to Austin, Texas in the fall of 2019 comes the multifaceted Jack Greenwood (born Travis Kohnhorst). Jack is currently suiting up for the release of his debut album, “Flying Softly,” which is a 10-track, multi-genre experience written and produced by Greenwood himself. The project as a whole features over 15 musicians, primarily based in Wausau and Eau Claire, two Wisconsin cities Greenwood identifies most with; although a few musicians come from beyond the Wisconsin border.

It began in the fall of 2016. While living in Eau Claire, WI, Jack met studio owner Justin Green through a Facebook discussion board. Green, relocating from Austin, TX, was starting to remodel his garage into a studio. They agreed to trade studio time for help with the renovation. Only a few hours into the first day of working, Jack sliced his middle finger on a table saw. To spare the details, this led to Green offering to record Jack’s next album. Recording began in June of 2017. In September 2017, Jack moved back to his hometown, Wausau, WI, while keeping plans to finish a record at Toy Car.

Over the next two years, many things occurred to make “Flying Softly” the record it is today. Early in 2018, Green purchased a Trident 80-C console from Justin Vernon’s (Bon Iver) April Base Studios. Shortly after, he attained an Otari MTR-90 2” tape machine from Smart Studios in Madison, WI. Jack would make the hour and half long drive a couple times a month to sleep on the studio futon for days in a row and work endlessly on the songs. Green engineered all and co-produced much of the record.

As the songs came closer to being finished, finding a mixing engineer became a daunting task. While searching, Greenwood was invited to RiverRock Studios in Minneapolis, MN to hang out during a friend’s tracking session. This is where he met mixing engineer and producer Kevin Israel. Together, the two were able to finish the record and send it off to get mastered by Greg Reierson (Prince, Sufjan Stevens, Cloud Cult,…) at Rare Form Mastering in Minneapolis, MN.

Follow and find out more about Jack Greenwood on