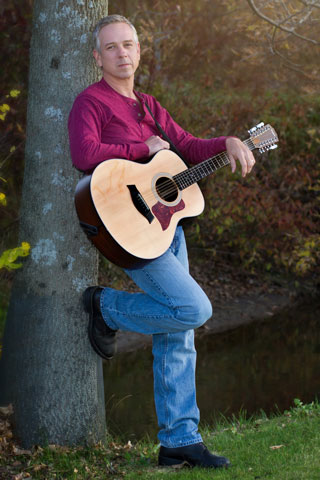 Noreika began his career as a guitarist for a number of Heavy Metal & Thrash bands. Some gained regional notoriety and others never left the basement. Through the years, the daily band rehearsals turned into only twice a week, then to  once a week, then to once a month. It seems that life crept up and changed priorities for Noreika and the other band members. Eventually being in a band faded into memory. Playing guitar for the joy of it became the norm. Gone was its importance as a career – it had turned into a hobby. To Noreika, this alternate path wasn’t empty or hollow. Quite the opposite, it’s brought him love, a Wife, a Son, a reasonable pay check, and many things he wouldn’t have known otherwise. Still, he missed doing the job he loved – performing music.

That being said, it was his 4 year old son that keyed him into the fact that something was missing. One morning Noreika was complaining under his breath about business attire, while ironing his clothes before work, when his Son said, “will you play with me?” Noreika tried to explain that he had to go to work and that he would play when he returned in the evening. His son looked up at him, slightly perplexed by the explanation, and said the words that changed everything, “Daddy, I wish you could be a songwriter so you could stay with me instead of going to work”. That was it (after Noreika wiped away some tears). That was the motivation he needed. The motivation he silently longed for. The giant kick in the pants that only a 4 year old could provide. That evening, after he tucked his son into bed, he began writing, composing, and practicing. He knew that being in a band was tricky and wrought with obstacles. So a decision to go solo was made.

Of significant importance was advice he received from his good friend and one time band-mate; Joe Goretti (drummer from AJR Brothers, Robyn, Ne-Yo, Moby, and many others), “Do it with no expectation of fame. Do it because you love it. Do it because it makes you happy. Do it because it’s who you are. Do it solo and be in charge of your own destiny”. With that as inspiration, it began. A three song EP was recorded and released. It has been described: “If you have never imagined throwing your fists up at the heavenly, sonic winds in full heavy metal fashion to driving riffs manifested from the strings of an acoustic guitar, strap yourself in because you are about to get folk-ed up enough to bang your head too! This epic debut release from singer-songwriter, Peter Noreika, not only embodies all that rocks but it’s fine-crafted with the kind of cross-the-heart honesty that you’d expect from a seasoned storyteller with an optimistic sparkle in his road weary narrative. Over this trio of catchy songs, prepare to embark on a personal trip from starry-eyed childhood through the reckless abandon of adolescence and rise to make a stand!”​​​​

Noreika is on radio rotation with the tracks “Falling Star” and “At The Dark Side”.

Tags: At The Dark Side Falling Star Noreika Rock & Alternative