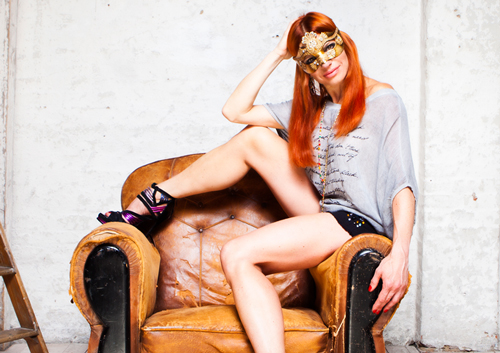 Pop singer and songwriter Mrs. X (www.mrs-x.tv) is located in Germany. Her style is called “pop á la carte”, because everyone can find something to relate to in her music. Mrs. X has started a new pop-project (which includes 5 Singles, one EP and 3 Albums) from now on until December 2017. The project will be releasing music each month. The first single to be released is “80 Miles Away” an international work featuring 33 musicians from 10 countries.

The track was produced by the award winning London based producer and sound designer Sefi Carmel, who has worked with Birdy, Michael Bublé, BB King and others. This is an entirely international collaboration. The background vocals were performed by Kirsten Rea from USA, while the rap performer is M.Dwizzy, a Jamaican born rapper.

“80 Miles Away Kansas Drive”, is another version of song, produced by Mrs. X herself, and mixed and mastered by Kansas based producer and sound engineer Lennon P. Bone. 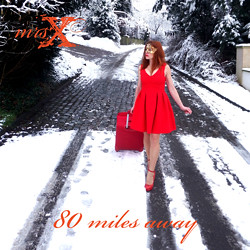 “Everywhere a stranger, everywhere at home.” No motto could better describe the cosmopolitan singer, songwriter, and producer Mrs. X. With familial roots stretching across the globe, she has ancestors from the Netherlands, the Dominican Republic, and Azerbaijan. However, that is the sum total of what we know of her private life. Her age, real name, and personal details are unknown to all save herself. Even the city she calls home remains an enigma.

None of this would be possible without living the act 24 hours a day, and she has maintained this level of secrecy since the first days of her career. Ever elusive, she never goes on stage without her gorgeous and intricately designed mask, which you will find on all of her album covers and music videos. When she first felt inspired to begin recording music, she turned to “The Circus Princess,” an operetta by Emmerich Kalman. In a world dominated by celebrity, the talented acrobat Mr. X shuns personal fame for love of his act. After donning a black mask one day, he begins wearing the mask during all of his performances to hide his identity, and he never reveals his name or personal history. With his origins safe from the public, he is free to pursue his art.

Just like her fictional inspiration, Mrs. X finds the mask and her secrecy key to her artistic liberation. Her secretive nature works both ways by allowing her audience to enjoy her music without that private noise. Over the years, she has shared a few morsels of her life growing up. We know that she has a solid musical education. She also studied law at a university though we don’t know the name of the university, and during those years, she pursued a second degree, but she has never specified in which field. While pursuing her studies, she discovered her deep love of writing music and performing, and although busy, she began her musical career. At first, she performed as a lead vocalist for several bands, but her career began to shine when she started composing her own songs.

Mrs. X created her signature style „pop á la carte“ in 2012. Drawing inspiration from her family’s background across multiple continents, she describes pop á la carte as pop mixed with a strong guitar riffs, with a  touch of rock and then seasoned with a slight Caribbean influence, and after years of experimenting and perfecting, she has transformed her new style into a gourmet musical menu. Just as she draws inspiration from around the world, she knows no boundaries when choosing her musicians. She loves it, to collaborate with musicians from all over the world. She has worked with producers like Yashar Bakhish from Baku and Carlos Perón, best known as the grounder for the Swiss band Yello.

In her current team are professionals from UK, Germany, Italy, Turkey, Jamaica, USA, Brazil and Azerbaijan. Rounding out the team behind all of the new albums is Sefi Carmel, an award-winning London-based composer, mixing and mastering engineer, producer, and sound designer. Over his long career spanning decades, he has been fortunate enough to work with dozens of A-list musicians and film directors. Mixing music has been one of his life’s great passions for more than 20 years. So far, he has had the honor and privilege to work with some of the world’s greatest musical icons such as David Bowie, Phil Collins, Michael Bublé, Bruno Mars, and countless others.

It will be hot next year:  three (!) new albums set to be released in 2017, and all of them continue this tradition of international cooperation. Although she exclusively composed all of the songs featured, musicians from the US, Canada, Jamaica, Azerbaijan, the UK, Israel, Russia, Italy, and Germany all collaborated with her to create the album. The first single „80 Miles Away“, which previews the first album „Pop á la carte“, was released in November 2016. And from now on Mrs. X will release her music (singles, EPs and albums) every month until 2018.